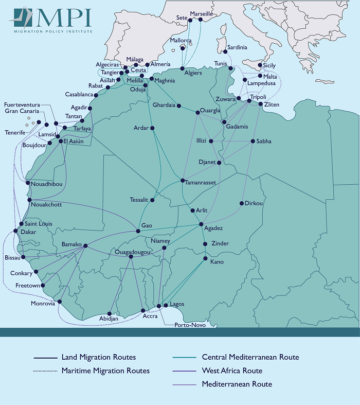 Though much attention in recent years has focused on sub-Saharan Africans attempting to reach Europe, migration within West Africa is roughly nine times larger than movements from the region toward either Europe or neighbouring North African countries.

For much of the 20th century, the Kingdom of Morocco was a land of emigration, with millions of its citizens moving to Europe and North America through both legal and illegal channels. However, in the 1990s Morocco’s role changed as it became a transit country for irregular migrants traveling from sub-Saharan and West Africa on their way to Europe. An estimated 700,000 sub-Saharan African migrants reside in Morocco, a country of about 34 million.

Since the number of migrants in Morocco began to grow in the early 2000s, media coverage has highlighted rising tensions and incidents of violence between immigrants and Moroccan citizens. This, coupled with reports from civil society and organizations such as the National Human Rights Council of the dire conditions in which many migrants were living, led King Mohamed VI to announce a comprehensive development framework, called the New Migration Policy (NPM for its name in French, Nouvelle Politique Migratoire), in 2013. Through what it described as a more human rights-oriented immigration policy, the Moroccan government aimed to regularize thousands of immigrants, among other aspects. The first phase of the policy’s implementation in 2014 saw more than 24,000 migrants, mostly from sub-Saharan Africa and Syria, gain a one-year legal status. This allowed immigrants to work legally, despite some social obstacles. A second phase was launched, granting residence permits to 28,400 migrants by December 31, 2017.

Hoping to reorient and improve its relationships with sub-Saharan countries, Morocco in 2015 launched the National Strategy on Immigration and Asylum; this was to replace the 2003 law with new policies and procedures to integrate migrants into Moroccan society. This policy seeks to guarantee migrants access to basic services such as education, health care, and labor-market integration. This announcement was considered a turning point in Morocco’s human-rights approach to irregular immigrants, mainly sub-Saharan Africans. However, NGOs and international institutions report that the reforms have done little to alleviate migrants’ vulnerability within the country.

The presence of sub-Saharan Africans in Sefrou is almost entirely limited to Thursdays – market days. Last week, I spoke to some of them about their time in Morocco. Our common language was French, but most spoke Moroccan Arabic (darija).

Two women in their thirties, hailing from the Senegalese capital of Dakar, sold jewellery and watches on tables on the side of the street. They were always on their feet, speaking with the Moroccans who sold their wares beside them, and speaking to others on the phone, through earplugs. Trade was good, lots of people came to inspect the jewellery and ask about prices.

Five years ago, the older of the two women had come directly to Fes from Dakar. She had been making the trip to Sefrou on Thursdays ever since, though she resides in Fes. The younger woman had come to Morocco more recently to join her.

The two women were here to make a living and send money back to their families. They felt that their destiny had brought them here, to Morocco. They told me that migration is everywhere in the world, part of human nature. This is an accurate and scientifically supported observation: Professor Hein de Haas of Maastricht University highlights the importance of acknowledging that migration has always, and will always, play a role in the human story. Banning or criminalising it does not work.

I next spoke to three young men from Cameroon, all in their mid-twenties. They were sweeping the street and begging not far outside the old medina. I had seen one of them before, but this time I stopped to talk. We all greeted and wished peace upon each other.

They told me their dream was to enter Europe, where they believed people to be welcoming and generous. I told them it wasn’t easy to get into Europe, and even if many Europeans are nice, there are political and structural obstacles in the way. They knew all of this, of course. I asked where they had been already. They had spent a year in Algeria followed by three years in Morocco. Whilst in Morocco, they had been in Tangiers before coming to the Fes region. Algeria was difficult, they told me, and they endured racism and xenophobia. Moroccans were more kind and welcoming, but life here was still difficult for them.

They couldn’t find work and didn’t have official papers, so they resorted to sweeping the streets and begging. I told them about a group of young Senegalese men whom I knew in Essaouira, in the south of Morocco, who made money by busking – playing drums – and selling jewellery, art and other objects from Senegal. Then I asked them what they had done for work in Senegal. Nothing, they replied, they had left not long after finishing school. They asked about me, what I was doing in Morocco, and how I perceived them when I saw them on the street. They were happy to hear that I hadn’t judged them in a negative light. After chatting a little about football, I went home to make us all some lunch.

When I came back, I couldn’t find them (cooking had, admittedly, taken me much longer than I said it would). I did, however, find another young man where they had been sitting, so I sat down for lunch with him, instead. He knew the three guys to whom I had promised lunch. He’d be meeting them this evening at the usual time – 8.30pm – in the usual place, the Café Argentine, outside a towering mosque. He told me there was a whole group of migrants from various sub-Saharan countries who met there every Thursday evening, and at various other times during the day. They had devised a rota system to divide up the city so that everyone took their turn to work in each area of Sefrou.

The young Malian, also in his twenties, lived in Meknes. He had lived in Morocco for several years and picked up the language, greeting everyone who walked past us in Moroccan darija. He was extremely grateful for the lunch, although comments from passers-by seemed to make him slightly uncomfortable. He asked me if I’d heard it when children passed remarking how unusual it was for me to be eating lunch on the roadside with a ‘poor’ guy. Ever acute observers of truth, the children were not wrong. It was unusual.

Hopefully, with the introduction of more comprehensive integration policies for sub-Saharan migrants, the next time we meet can be in a more formal, integrated, social setting – a restaurant, perhaps – and our meeting will be seen as more normal.