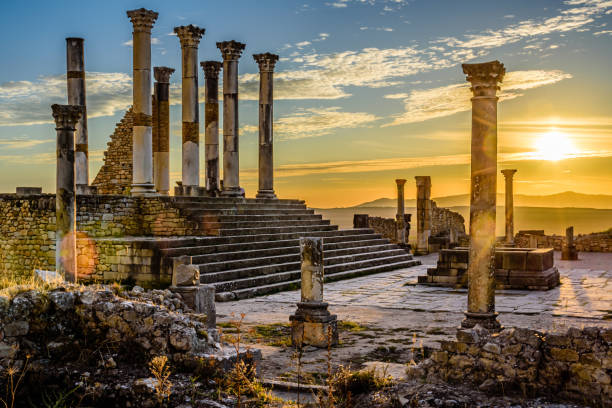 Rome’s influence in the Maghreb was geographically limited, but for 300 years it was of strategic importance and a source of vast wealth for the empire. The breathtaking archaeological remains, especially at Volubilis, point to Rome’s commitment to the region.

By the 3rd century BC, Carthage (modern-day Tunis) had caught the attention of Rome, who eyed it with a desire that epitomized the empire’s insatiable appetite for expansion. A trio of Punic Wars, spanning 100 years, caused Rome to fear for its future. However, Carthaginian potency waned with the death of Hannibal, and in 146 BC, after a three-year siege, Carthage was finally crushed. Rome annexed North Africa and now controlled the Mediterranean. The region was divided among various client kings, headed by the Numidian prince Jugurtha. When he attempted to unify the kingdoms in revolt, Rome had no choice but to act. In 106 BC, after a six-year war, Jugurtha was dead and Rome’s grip on North Africa left unchallenged—at least for another 60 years, that is.

Volubilis was home to Juba II and his son Ptolemy. Under this cultured duo, the city blossomed and continued to thrive well after Rome’s departure in the 3rd century AD. After a millennium of constant occupation, the city was plundered for its stone in the 17th century by Moulay Ismail, but what remains is simply stunning—one reason the ruins were named a UNESCO World Heritage Site.

Following Julius Caesar’s march on Rome in 49 BC, Republican resistance had been growing, and nowhere more rapidly than in North Africa. Caesar arrived there in 47 BC with 30,000 men. One year later, at Thapsus (in present-day Tunisia), his outnumbered legions soundly defeated the armies of King Juba of Numidia (in present-day Algeria) and Republican forces led by Scipio. Over the following months, resistance was crushed throughout North Africa, and Rome’s grip on the Maghreb became tighter than ever.

Despite his father’s allegiances, Juba II was installed as the client king of Numidia and later Mauretania. Juba had been educated in Rome and was a sophisticated and respected monarch. While living in Volubilis with his wife Cleopatra Selene (daughter of Antony and Cleopatra), he wrote many geographical and historical works. It was under his rule that the city flourished and became a showcase for palatial architecture as well as a center for commerce.

Juba II was of Berber descent and co-ruled with his son Ptolemy, nurturing their comfortable relationship with Rome, even asking for (and receiving) military assistance in crushing a violent Berber rebellion in AD 24.

In AD 40, all of that was to change with the arrival of the notoriously unstable Caligula who, in a fit of jealousy, had Ptolemy murdered and then declared an end to Berber autonomy. Unsurprisingly, the province rose up in a bloody revolt that was eventually put down by Emperor Claudius.

Claudius divided the province into Mauretania Caesariensis (West Algeria) and Mauretania Tingitana (Morocco) whose capital was Tingis, present-day Tangier. Rome developed existing towns rather than starting new settlements, and Volubilis in particular benefited. It exported vast quantities of olive oil and wheat to Rome, eventually supplying fully two-thirds of that city’s food. There was also a healthy trade in wild animals for slaughter in the Coliseum; it is thought that in the course of two centuries the lion, bear, and elephant populations in the province were reduced to nothing.

In 285 Rome called a halt to its ambitions in Africa and left the region after 300 years of almost undisputed occupancy. A small garrison remained, and Morocco remained part of the Roman empire until the 5th century AD. Roman influence in the Maghreb was confined to the northwest of the country and stopped just north of Rabat. Although relatively brief and limited, the Roman presence has left Morocco architectural remains to rival any in North Africa.