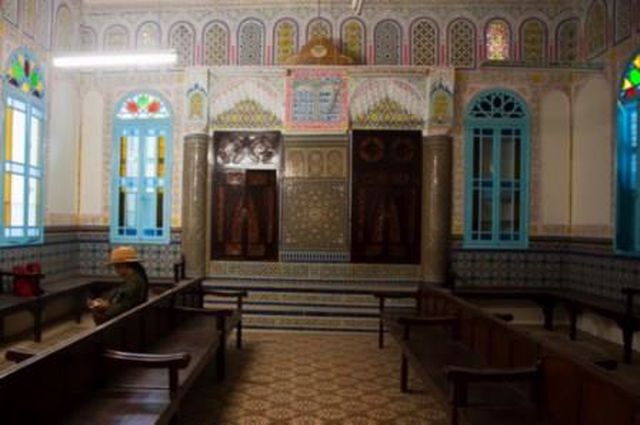 Sefrou was known as the “little Jerusalem of Morocco” because of its rich religious life and many rabbis who served or learned there. The community itself is thought to have been established during ancient times.

During the 13th century Jews from the north and southern Morocco and Algeria settled in Sefrou. Later, in 1596, many Jewish exiles from Spain came to live in Sefrou. As a result of these new arrivals, the community increased in number, though it was still overshadowed by the larger community in Fez

The Jews lived in a mellah, which was located inside the walls of the old Arab town. The mellah occupied about two and a half acres, and was very crowded.

The cave “Kef al Yahudi” was located at the northern route into Sefrou. According to tradition, the prophet Daniel was buried in the cave. An ancient Jewish cemetery was located nearby, though the cemetery ultimately fell into abandon and disrepair.

On the eve of World War I (1914-1918) the Jews of Sefrou, like Jews throughout Morocco, were forced to deal with the general chaos that broke out following the partition of Morocco into two protectorates: Spain and France. Sefrou became part of the French protectorate.

The Jews of Sefrou were subject to harassment by the local population and discrimination against by the Vichy government of France (1940-1943).

After the war, the community continued to be managed by an elected committee. A number of mutual aid and charitable institutions became active at the beginning of the 1950s, including a chevra kaddisha, a Bikkur Cholim Society for visiting the sick, a Hachnasat Orchim Society for providing local hospitality.

The rabbi and dayan (judge) who served the Jewish community after the Second World War was Rabbi David Obadiah, whose father had been the community’s rabbi until his death at the end of the 1940s. There was also a beit din (Jewish court). Two battei midrash possessed collections of old and important books written by scholars of Sefrou, including the manuscript of the book Kisse Melakhim, a general history of Morocco and Moroccan Jews.

Jewish education for children and adults was important to Sefrou’s Jewish community. Sefrou had a yeshiva and Torah study groups such as Elijahu Hanavi and Simeon bar Yochai for adults. Small children attended cheder.

Em Habanim, a Talmud Torah school, was founded in 1917 through donations made by mothers. By 1956 it had 12 classes, with 14 teachers and 650 pupils. The curriculum included Hebrew, prayers, Jewish law, Bible, and Talmud.

Older boys who graduated from the Talmud Torah studied at the yeshiva, Beit David, which had an enrollment of about 40. Additionally, the Lubavich Chasidim of New York set up a Beit Rivka school for girls, which had 50 students. A branch of the Alliance Israelite Universelle was attended by 482 girls and 231 boys. A plan was drawn up in 1956 to set up a vocational school for girls under the umbrella of ORT that would be financed by the Joint Distribution Committee. This school, however, was never built because by that point most of Sefrou’s Jews had left for the newly-established State of Israel.

In 1956 the community of Sefrou numbered about 4,000 Jews (about one-third of the total population). Before Morocco achieved independence that year, approximately 2,000 members of the community immigrated to Israel. By 1967 the remaining Jews had left for Israel.

As of 2013, the building that once housed the Em Habahim orphanage, which was originally inaugurated in 1917, has remained standing. The orphanage included a synagogue, which has been preserved and contains prayer books, as well as some French books.