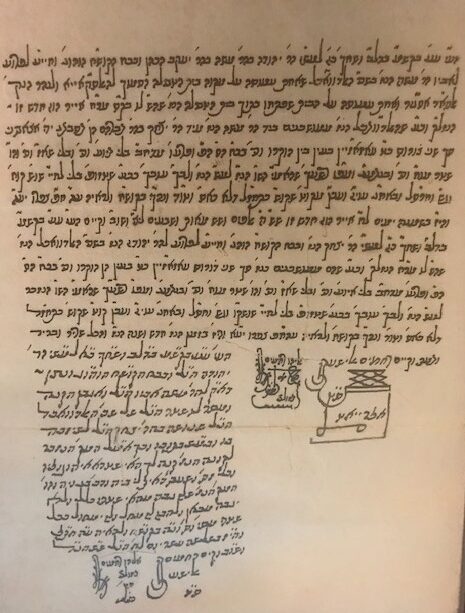 “For every language, there is a person”. So runs a well- known Arabic proverb. Each language has its own distinctive personality which at one and the same time is a reflection of the persons that speak it, and is a distinguishing stamp upon them, not only identifying, but influencing them as well. Language is perhaps the most basic medium of expression in any culture, preceding even art. It concretises the symbolic process of thought, transmits information, beliefs, values, and aspirations. Through the vehicle of language, a culture conveys its views of the world and no less importantly—its image of itself.

In this study, Sefriwi Judaeo-Arabic is examined not solely to present a discrete linguistic description in and of itself (although it is hoped that linguists will find it to be of interest), but also to offer a prism through which may be seen selected aspects of Sefriwi Jewry’s cultural universe. This is, therefore, an ethnolinguistic study in which a community’s life is approached through its language. It is also to some extent an interlinguistic endeavour in that it is set within the broader framework of, on the one hand, Arabic dialectology studies, and on the other, Jewish language studies, each with their own disciplinary concerns and each with their own particular points of reference.

The existence of numerous Jewish languages has been a function of more than two millennia of Diaspora existence on the one hand, mitigated or tempered by Jewish group cohesion within the far-flung lands of their dispersion on the other. These languages are a reflection of that dynamic tension in Jewish cultural history between the conflicting urges of assimilation and individuality. As the late Haim Hillel Ben-Sasson has noted, once an initially “alien language gained acceptance, it became not only a vehicle of Jewish cultural and religious creativity, but also gradually became converted into a specifically Jewish idiom and mark of Jewish identity that even formed barriers to later assimilation”.

During the Middle Ages, Jews from Spain to the borders of Iran adopted along with other peoples–the Arabic language in the wake of the Islamic conquests of the seventh and eighth centuries. They did so because Arabic was becoming the international language of the new oikoumene, even as Greek and Aramaic had been before, only now over an even larger area. By the tenth century, Jews had begun to use Arabic not only as their daily spoken language, but for nearly all forms of written expression, including religious queries and responsa, documents, textual commentaries, philosophical and scientific literature, and day-to-day correspondence. Only poetry was written exclusively in Hebrew for nationalistic reasons, since poetry was the ultimate national art in Islamic civilization. It was into Arabic that Sa’adya Gaon translated the Hebrew Bible. It was in Arabic that he wrote his first systematic work on Jewish theology, the Book of doctrines and beliefs, that Judah ha Levi wrote his philosophical dialogue, The Kuzari, and that Maimonides wrote his masterful synthesis of Judaism and Aristotelianism, The guide of the perplexed.

The language of the Jews of Sefrou belongs to the great Maghrebi Arabic dialect family that includes the dialects spoken from Libya to Morocco and Mauritania, as well as Maltese, and, for the Middle Ages, Andalusian Arabic. Sefriwi Judaeo-Arabic is of the so-called “old urban type (le vieux parler citadin, as the French linguists refer to it) spoken prior to the arrival of the Banū Hilāl and Ma’qil Bedouin in Morocco during the second half of the twelfth century. Hence it shows many affinities with the dialects of Old Fez (Fäs al-Bālī) and the Fez Mellāh, Taza, Rabat, Salé, T’etuan and El-Qsar EI-Kebir, although it also exhibits certain features of the Jebli, or old montagnard speech which is also pre-Hilali, found to the north and east of it. Sefriwi Judaeo-Arabic has a good number of characteristics in common with Fasi Judaeo-Arabic, as for example:

There are, however, numerous distinctive differences between Fasi and Sefriwi Judaeo-Arabic. Sefriwis do not substitute /d/ for /g/ (from Cl. Ar. jim) as Fasis do in certain words. Thus Fasi däz/,idüz/ (to pass, to spend time) and /tedāwiz/ (salads eaten as hors oeuvres) are in Sefrou gāz/, /igüz/ and /pegāwiz/. The emphatic /b/ which is extremely rare in Fasi Judaeo-Arabic is common in Sefriwi, especially among women. In addition to  orbbi/, which is the sole instance in Fasi,6 Sefriwis say /tbīb/ and tbbā/ (doctor, doctors), /Tobbälī/ (Tobaly–a family name), and /tomõbil/ (automobil). A number of Sefriwi women in Israel would say [harbe for /harbe (much, a great deal) when speaking Hebrew. The intonation of Sefriwi Judaco-Arabic is quite different from that of Fez, or anywhere else in Morocco for that matter, with its distinctive sing-song, the voicing going up at the end of sentences and then slowly trailing off. One feature which seems to be almost unique to the Judaeo- Arabic of Sefrou, and for which I know of no parallels either in Morocco or other Arab countries, is the frequent substitution of T for /k/, especially when it occurs as the final letter of a word and in the second person plural pronominal suffix /kum/. Sefriwis normally say, for example, [di’] for /dik/ (that fs.), [ls’] for lek/ (to you), [dyāl’üm] (yourS pl.), and [a saxbar üm] for /a šaxbarkum/ (how are you?).

Like all Moroccan dialects, Sefriwi Judaeo-Arabic exhibits a great deal of vowel loss and the resulting consonantal clusters which are the hallmarks of the Maghrebi language family in general. On the whole, this phenomenon seems to be even more advanced in Sefriwi Judaco-Arabic. There is a great instability in the syllabic structure and in vowel quality in the formal scatter of lexical terms.

The Hebrew element in Sefriwi Judaeo-Arabic

There is an important Hebrew and Aramaic element in Sefriwi Judaeo-Arabic as in all Jewish languages. In fact, for the sake of simplicity, this element may be referred to as “Hebrew” since: (a) little or no distinction between the two was made in traditional rabbinic usage, and (b) the Aramaic component in and of itself is relatively minor.63 There is a considerable Hebrew vocabulary that has been assimilated into the dialect, although it is certainly nowhere near the approximately 4,000 Hebrew lexical items in Yiddish.64 Whether this is because, as S.D. Goitein has hypothesised, that Arabic-speaking Jewry’s “knowledge of living Hebrew was far more developed than was the case in eastern Europe” and so “they refrained from mixing up the two languages”,65 is difficult to say. Moshe Bar-Asher, using both contemporary and historical written sources as well as informants from five different regions of Morocco, was able to build up a glossary of nearly 2,000 Hebrew words. 66 However, for the dialect of a single region of concentration (the Tafilalet), the maximum number of Hebrew lexical items in the speech of rabbis and scholars was approximately soo, in the speech of literate men approximately 330, and in the speech illiterate men and women 285 and 260, respectively.

Berber elements in Sefriwi Judaeo-Arabic are extremely few, and they are more or less comparable to those in other old urban dialects of the region, as well as the Jebli dialects. Berber vocabulary items are notably less than in the Jewish vernaculars of the Tafilalet and the Sous where the Berber population has remained predominant and where there are no prestigious centres of Arabic culture. Indeed, most all of the Berber words in Sefriwi Judaeo-Arabic are those which have become part of the general Maghrebi vocabulary. Professions, for example, are expressed by the Berber feminine form tafe“ālət/. Thus”shoemaking” is /jaxerrazj/.

There is an extensive vocabulary of Spanish loanwords in Sefriwi Judaeo-Arabic. The Spanish element is of two types. One type includes the not inconsiderable number of lexical items that are shared with other urban dialects of northern and central Morocco, both Jewish and non-Jewish. These words have been entering Moroccan Arabic from the Middle Ages to modern times due to the close relations between Iberia and the Maghreb, not to mention the physical propinquity. Included in this group are words like: /busta/ (post office-Sp. posta), /bizita) (visit-Sp. visita), /fabor/ (favour-Sp. fabor), /falta/ (fault-Sp.falfa), /familiya/ (family—Sp. familia), /garfo/ (fork-Sp. garfio), gira/ (war—Sp. guerra), /kutīna/ (kitchen-Sp. cocina), /sala/ Fliving room—Sp. sala), sabana/ (curtain -Sp. sabana), / sebniyya/ (kerchief-Sp. sabanilla), /sinta) (ribbon-Sp. cinta), skwila/ (school-Sp. escuela), /suppa/ (soup-Sp. sopa), /swerți/ (luck-Sp. suerte), /tren/ (train-Sp. tren). The second type of Spanish element includes that vocabulary which is peculiar to Judaeo-Arabic. Jews from Spain came to Morocco in several waves from the late fourteenth to early fifteenth century. Castilian Judezmo was spoken in Fez (and perhaps in Sefrou) by the Megorashim during the sixteenth century, but eventually gave way to the predominant Judaeo-Arabic.  Many of the words in this group are terms of material culture (cuisine, clothing, furnishings, etc.). These include words Like: /bankol (upper apartment-Sp. banco), /banyol (wash basin-Sp. baño/fdaws/ (vermicelli-Sp. fideos),”…

Anyone with a modicum of modern, secular education uses a great many French words in Sefriwi as in all other dialects of Moroccan Arabic. Dates are frequently given in French. Most modern technical vocabulary is French, as for example, Alaviyon (airplane-Fr. l’avion) or /1-fren/ (car brakes-Fr. freins). Likewise, many of the terms for communal institutions established under the Protectorate are in French, as for example, /1-kumitēl (communal governing committee-Fr. le comité), /1-prezidan/ (chairman-Fr. le president), etc. Many European items of clothing are also referred to by variants of their French names, as for example, /1-kumplēſ (suit- Fr. le complet), /l-birēl (beret), /1-kombinezon/ (slip-Fr. la combinasion). Traditional women who have not had any education outside the home use surprisingly few French words, among them- /fular) (scarf-Fr. foulard), ſlaperitif/ (Fr. l’apéritif), /mersi/ (thank you-Fr. merci), /pitrol/ (kerosine, gasoline-Fr. petro), /lasantyur/ (belt-Fr. la ceinture).

* The featured image is a Sefrouian Rabbi’s sales contract written in Judeo Arabic for a large quantity of olives. 19th Century Part of SMM collection, donated by to Mrs L. Shaprio