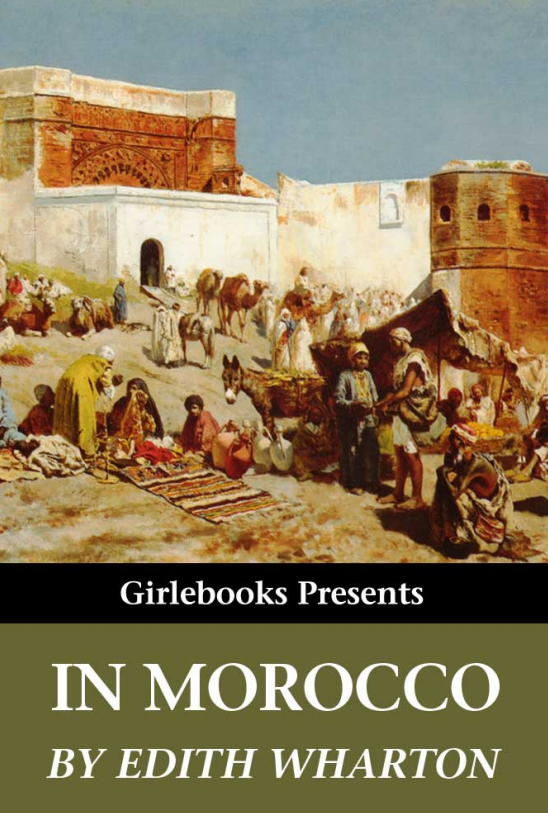 Edith Wharton (born Edith Newbold Jones; January 24, 1862 – August 11, 1937) was an American novelist, short story writer, and designer. Wharton drew upon her insider’s knowledge of the upper-class New York “aristocracy” to realistically portray the lives and morals of the Gilded Age. In 1921, she became the first woman to win the Pulitzer Prize in Literature, for her novel The Age of Innocence. She was inducted into the National Women’s Hall of Fame in 1996. Among her other well-known works are The House of Mirth and the novella Ethan Frome.

In Morocco is a travel account written by Edith Wharton in 1917 and published in 1920. Wherein vividly depicts Morocco’s major cities, describing the people, architecture, customs, and history of Morocco, and represents the dramatic changes occurring in it during the aftermath of the First World War. Edith’s journey of depiction includes her travels from Rabat to sale, to Volubilis and then to Moulay Idriss and Meknes where she provides a comparative description of the Medersas, Bazaars, and Oasis in fez Eldjid and of Fez Elbali.

Sefrou is a military outpost in an oasis under the Atlas, about forty miles south of Fez. To most people the word “oasis” evokes palms and sand; but though Morocco possesses many oases it has no pure sand and few palms. I remember it as a considerable event when I discovered one from my lofty window at Bou-Jeloud.

The bled is made of very different stuff from the sand-ocean of the Sahara. The light plays few tricks with it. Its monotony is wearisome rather than impressive, and the fact that it is seldom without some form of dwarfish vegetation makes the transition less startling when the alluvial green is finally reached. One had always half expected it, and it does not spring at a djinn’s wave out of sterile gold.

But the fact brings its own compensations. Moroccan oases differ one from another far more than those of South Algeria and Tunisia. Some have no palms, others but a few, others are real palm-oases, though even in the south (at least on the hither side of the great Atlas) none spreads out a dense uniform roofing of metal-blue fronds like the date-oases of Biskra or Tozeur. As for Sefrou, which Foucauld called the most beautiful oasis of Morocco, it is simply an extremely fertile valley with vineyards and orchards stretching up to a fine background of mountains. But the fact that it lies just below the Atlas makes it an important market-place and centre of caravans.

Though so near Fez it is still almost on the disputed border between the loyal and the “unsubmissive” tribes, those that are Blad-Makhzen (of the Sultan’s government) and those that are against it. Until recently, therefore, it has been inaccessible to visitors, and even now a strongly fortified French post dominates the height above the town. Looking down from the fort, one distinguishes, through masses of many-tinted green, a suburb of Arab houses in gardens, and below, on the river, Sefrou itself, a stout little walled town with angle-towers defiantly thrust forth toward the Atlas. It is just outside these walls that the market is held.

It was swarming with hill-people the day we were there, and strange was the contrast between the crowd inside the circle of picketed horses and the white-robed cockneys from Rabat who fill the market-place of Salé. Here at last we were in touch with un-Arab Morocco, with Berbers of the bled and the hills, whose women know no veils and no seclusion, and who, under a thin surface of Mahometanism, preserve their old stone and animal worship, and all the gross fetichistic beliefs from which Mahomet dreamed of freeing Africa.

The men were lean and weather-bitten, some with negroid lips, others with beaked noses and gaunt cheek-bones, all muscular and fierce-looking. Some were wrapped in the black cloaks worn by the Blue Men of the Sahara,[17]with a great orange sun embroidered on the back; some tunicked like the Egyptian fellah, under a rough striped outer garment trimmed with bright tufts and tassels of wool. The men of the Rif had a braided lock on the shoulder, those of the Atlas a ringlet over each ear, and brown woollen scarfs wound round their temples, leaving the shaven crown bare.

The women, squatting among their kids and poultry and cheeses, glanced at us with brilliant hennaed eyes and smiles that lifted their short upper lips maliciously. Their thin faces were painted in stripes and patterns of indigo. Silver necklets covered their throats, long earrings dangled under the wool-embroidered kerchiefs bound about their temples with a twist of camel’s hair, and below the cotton shifts fastened on their shoulders with silver clasps their legs were bare to the knee, or covered with leather leggings to protect them from the thorny bled.

They seemed abler bargainers than the men, and the play of expression on their dramatic and intensely feminine faces as they wheedled the price of a calf out of a fierce hillsman, or haggled over a heap of dates that a Jew with greasy ringlets was trying to secure for his secret distillery, showed that they knew their superiority and enjoyed it.

Jews abounded in the market-place and also in the town. Sefrou contains a large Israelite colony, and after we had wandered through the steep streets, over gushing waterfalls spanned by “ass-backed” Spanish bridges, and through a thatched souk smelling strong of camels and the desert, the French commissioner (the only European in Sefrou) suggested that it might interest us to visit the Mellah.

It was our first sight of a typical Jewish quarter in Africa. The Mellah of Fez was almost entirely destroyed during the massacres of 1912 (which incidentally included a pogrom), and its distinctive character, happily for the inhabitants, has disappeared in the rebuilding. North African Jews are still compelled to live in ghettos, into which they are locked at night, as in France and Germany in the Middle Ages, and until lately the men have been compelled to go unarmed, to wear black gabardines and black slippers, to take off their shoes when they passed near a mosque or a saint’s tomb, and in various other ways to manifest their subjection to the ruling race. Nowhere else do they live in conditions of such demoralizing promiscuity as in some of the cities of Morocco. They have so long been subject to unrestricted extortion on the part of the Moslems that even the wealthy Jews (who are numerous) have sunk to the habits and appearance of the poorest; and Sefrou, which has come so recently under French control, offers a good specimen of a Mellah before foreign sanitation has lighted up its dark places.

Dark indeed they were. After wandering through narrow and malodorous lanes, and slipping about in the offal of the souks, we were suddenly led under an arch over which should have been written “All light abandon–” and which made all we had seen before seem clean and bright and airy.

The beneficent African sun dries up and purifies the immemorial filth of Africa, where that sun enters there is none of the foulness of damp. But into the Mellah of Sefrou it never comes, for the streets form a sort of subterranean rabbit-warren under the upper stories of a solid agglomeration of tall houses–a buried city lit even at midday by oil-lamps hanging in the goldsmiths’ shops and under the archways of the black and reeking staircases.

It was a Jewish feast-day. The Hebrew stalls in the souks were closed, and the whole population of the Mellah thronged its tunnels in holiday dress. Hurrying past us were young women with plump white faces and lovely eyes, turbaned in brilliant gauzes, with draperies of dirty curtain muslin over tawdry brocaded caftans. Their paler children swarmed about them, little long[1]earringed girls like wax dolls dressed in scraps of old finery, little boys in tattered caftans with long-lashed eyes and wily smiles, and, waddling in the rear, their unwieldy grandmothers, huge lumps of tallowy flesh who were probably still in the thirties.

With them were the men of the family, in black gabardines and skull-caps, sallow striplings, incalculably aged ancestors, round-bellied husbands and fathers bumping along like black balloons, all hastening to the low doorways dressed with lamps and paper garlands behind which the feast was spread.

One is told that in cities like Fez and Marrakech the Hebrew quarter conceals flowery patios and gilded rooms with the heavy European furniture that rich Jews delight in. Perhaps even in the Mellah of Sefrou, among the ragged figures shuffling past us, there were some few with bags of gold in their walls and rich stuffs hid away in painted coffers, but for patios and flowers and daylight there seemed no room in the dark bolgia they inhabit. No wonder the babies of the Moroccan ghettos are nursed on date-brandy, and their elders doze away to death under its consoling spell.