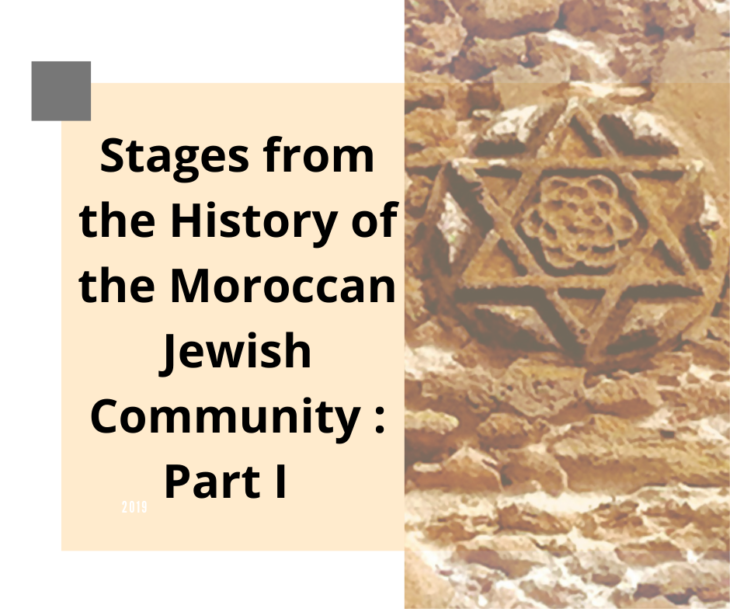 Morocco, the westernmost country in North Africa, has a rich and treasured Jewish history dating back to antiquity, including legends that say Jews settled in the country before the destruction of the First Temple. Following the establishment of Israel in 1948, many Jews were forced to leave Morocco. Today, the Jewish population of Morocco stands at approximately 2,100 people. In this series of articles, we will be introducing the reader to stages from the history of this community spanning over the centuries.

From the fifth to the third centuries B.C.E., the Carthaginian gold market was situated in Morocco. On this historical basis, an ancient legend relates that some five centuries before the Carthaginian expansion, in the days of Solomon and the Phoenicians, the Hebrews came to Sala (Chella) in the vicinity of Salé (Rabat) in order to purchase gold in large quantities. In another legend, it is related that Joab was sent to Morocco to fight the Philistines, who had been driven out of Canaan; an inscription describing this expedition is said to have existed near the present-day town of Zagora. Wadi Oued Draa and the region of Oufran (Ifran of the Anti-Atlas) are said to have been the sites of important Jewish settlements before the destruction of the Second Temple. The earliest epigraphic evidence on the presence of Jews in Morocco, however, comes from the second century C.E. It consists essentially of inscriptions on tombstones found in the ruins of the Roman town of Volubilis, between Fez and Meknès , and another inscription discovered in Salé. The latter is in Greek, while one of the inscriptions of Volubilis is in Hebrew.

Morocco, like the remainder of the Maghreb, was one of the favorite territories for Jewish missionary activities. The Jews, together with those whom they succeeded in converting, appear to have originally been numerous and particularly powerful. The great Arabic historian of the 14th century, Ibn Khaldūn, names a number of large Moroccan Berber tribes who were converted to Judaism prior to the Arab conquest. These were the Fandalāwqa, Madyūna, Bahlūla, Ghiyāta, and Bazāz tribes. The capital of the last was also named Bazāz or Qulʿat-Mlahdī. It was completely inhabited by Jews and did not disappear until the 12th century. It was situated near the present-day town of Sefrou. Other tribes, such as the Barghwāṭa, were also heavily Judaized. Between 581 and 693 many Jews were compelled to leave Spain as a result of the persecutions of the Visigoth kings who, while forcing them to accept baptism, also adopted draconian measures against them. According to later traditions, thousands of Spanish Jews had settled in Africa by 693. It is told that these Jews, together with their Moroccan coreligionists, plotted to conquer or deliver Spain into the hands of the more tolerant Muslims (694). Some historians maintain that there were Jews among the Berber-Muslim invaders of Spain in 711.

The Arab conquest of Morocco and its conversion to Islam did not bring about the elimination of the Jews or the Judaized Berbers. However, when Idris I seized power in 788, it was his intention to compel all the inhabitants of the country to embrace Islam. After the death of Idris I, there remained some Jewish or Judaized tribes in the area of Fez. When Idris II (791–828) decided to establish his capital in Fez, he authorized Jews of all origins to settle there. Their dispersion in all the regions was one of the principal reasons for their economic strength at the time. The story goes that the inhabitants of Fez revolted against the ruler Yaḥya (860), who had violated the chastity of a Jewish girl. The pogrom in Fez in 1033 is to be seen as an isolated event due to the Jewish support for the Maghrawas, the rivals of the Ifrenids. At a later date, the Almoravids prohibited the Jews to live in their capital Marrakesh . The most brilliant period of the Jews of Morocco from the spiritual and intellectual point of view belongs to the reigns of the Idrisids and their successors. The numerous departures for Spain drained neither the strength of Moroccan Jewry nor its intellectual activity. Even after the departure of R. Isaac Alfasi from Fez for Cordoba (1088), Judaism in Morocco retained its vigor. Under the Almoravids there was even a trend in the opposite direction. Two of the physicians of the Almoravid sovereigns, Meir ibn Kamniel and Solomon Abūab Muʿallim in Marrakesh, were of Spanish origin, one from Seville and the other from Saragossa. Both were distinguished Torah scholars. There were also scholars in Ceuta , the native town of Joseph ibn Aknin, the disciple of Maimonides. There was also an important center of learning in Sijilmassa (ancient capital of Tafilalet oasis). Scholars were to be found in the Atlas region, in Aghmāt; of these, there is information on the talmudist Zechariah b. Judah Aghmati. In Fez studies were carried on continuously; it was for this reason that Maimonides and his family settled there after leaving Spain during the persecution of the Almohads.

The doctrine of the mahdi Ibn Tūmart, which inaugurated the Almohad movement, did not tolerate the existence of non-Muslims. At the beginning, the latter were among the victims of the Almohad soldiers, who were highlanders in search of plunder. Indeed, many of the Jews were wealthy. By the time that ʿAbd al-Muʾmin (1128–63) had finally imposed Almohad domination in 1154, many Jews had already converted under the threat of the sword. After that, there was a short period of improvement in the situation of the Jews in Fez. Those who had been spared from the massacres and the conversions were then able to resume a relatively normal life. This situation changed with the advent of Abu Yaʿqūb Yūsuf (1165–84). The recrudescence of fanaticism once more resulted in the forced conversion of Jews. The dayyan of Fez, R. Judah ha-Kohen ibn Shushan, who refused to submit to this, was burnt alive, and at that time Maimonides left Morocco. The situation deteriorated even further under al-Mansūr (1184–99) who imposed on the Jews, including those already converted, the wearing of a distinctive sign, the Shikla, because he did not believe in the sincerity of their conversion. The presence of Jews was authorized once more by al-Mʾamūn (1227–32), but their appearance drew the anger of the Muslims who massacred all of them in Marrakesh (1232). The Jews did not return in considerable numbers until the time of the dynasty of the Merinids , who replaced the Almohads in 1269. During Almohad rule, many Moroccan Jews had left the country for the East, above all for Christian Spain. Large numbers of them settled in the territories of the kings of Aragon, in Catalonia and Majorca, where they were favorably received.

The Merinids proved themselves particularly friendly toward the Jews. When the still-fanatic mobs attacked them in 1275, the Merinid sultan intervened personally to save them. The sovereigns of this dynasty benevolently received the Jewish ambassadors of the Christian kings of Spain and admitted Jews among their closest courtiers. Of these Jews, Khalifa b. Waqqāsa (Ruqqasa) became steward of the household of the sultan Abu Yaʿqūb and his intimate counselor. A victim of palace intrigues, he was put to death in 1302. His nephew, who was also named Khalifa, held the same office and suffered the same fate (1310). However, there were no repercussions against the Moroccan Jews as a result of the execution of their powerful coreligionists. They were the principal factors in the prosperity of the country. The Sahara gold trade, which was of primary importance, and the exchange with the Christian countries were completely under their control. Their relatives and associates in the kingdom of Aragon financed, when necessary, the navies which defended the Moroccan ports. In addition to the jizya(poll tax), they paid enormous sums to the treasury in customs duties for their imports and exports. In the outlying areas, particularly in the Atlas region where there were large concentrations of Jews of early origin, the Jews wielded great influence in both the political and spiritual domains. Jewish physicians enjoyed well-deserved renown. The study of Kabbalah, as well as philosophy, was then in vogue. The last Moroccan philosopher of the Middle Ages was Judah b. Nissim ibn Malkah , who was still alive in 1365.