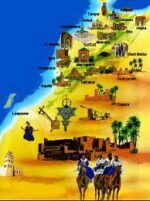 Being located in a strategic position between North Africa and Southern Europe, or better still, a bridge between two continents, Morocco enjoys a blend, and also a variety, of influences ranging from Amazigh, Arabic, Sub-Saharan African, Jewish and European. This mixture has historically immensely impacted the country and made of it what it is today.

The term Morocco in Arabic is ‘Al Maghreb’, meaning where the sun sets, as opposed to ‘Al Mashreq’ where the sun rises. It also means the ‘West’ due to its location in the west of the Arabian Peninsula geopolitically known today as the Middle East. As said earlier, Morocco claims a mix of indigenous Amazigh, Arab, African, Jewish and European influences. Situated in North Africa and the MENA region’s only monarchy, the country has been visibly talented to shape its rich cultural heritage into a universally reputed tolerant state.

Defining a Moroccan is not an easy task to undertake. However, the ensuing features will try to provide some light on how to approximately outline a Moroccan.

– A Moroccan is the one who speaks the Moroccan dialect – a variety of formal Arabic.

– A Moroccan is an Arab, Mediterranean, North-African, Amazigh, Muslim, Jewish and secular.

In short, a Moroccan is a bit of all of the above, simply because different ethnicities have always co-habited, and co-existed, under one single flag, that of Morocco. The 2011 Moroccan Constitution clearly refers to the aforementioned components of the Moroccan identity:

A sovereign Muslim State, attached to its national unity and to its territorial integrity, the Kingdom of Morocco intends to preserve, in its plenitude and its diversity, its one and indivisible national identity. Its unity, is forged by the convergence of its Arab-Islamist, Amazighe and Saharo-hassanie components, nourished and enriched by its African, Andalusian, Hebraic and Mediterranean influences. The preeminence accorded to the Muslim religion in the national reference is consistent with [va de pair] the attachment of the Moroccan people to the values of openness, of moderation, of tolerance and of dialog for mutual understanding between all the cultures and the civilizations of the world.