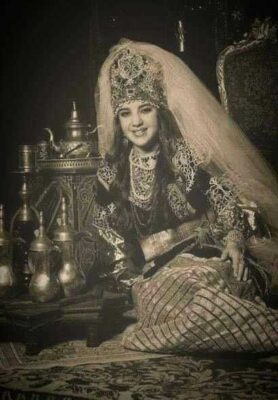 What’s in a cup of tea? The spice of life, Moroccan whiskey or atay, the nominations are diverse for the magical aromatic liquid in a teapot, commonly known as Moroccan mint tea but it remains the undisputed signature drink of Moroccans, a token of hospitality and friendship, a fuel to social gatherings, and a great post-meal digestive. Mint tea is a daily, almost sacred ritual that takes place in almost all Moroccan households; its meticulous preparation and its intricate presentation are immaterial heritage passed down from our ancestors. So, in answer to the first question, more than you might think!

The history of how tea became so prominent in Morocco is not very easy to trace back, however, the first documented consumption of tea occurred in either the late seventeenth or early eighteenth century, when Queen Anne of England sent a box of tea to Sultan Moulay Ismail as a gift, in hopes of releasing English captives in Morocco. The Sultan and his courtiers appreciated the drink and incorporated it in ceremonial events, as import duties and transportation costs were fairly high in Morocco, only small quantities were possible to import before the nineteenth century, and so it stayed an elite practice inaccessible and probably even unknown to most Moroccans.

In the nineteenth century, the vast majority of tea consumed in Morocco came from China and is sourced from the infamous tea tree, camellia sinensis, that is native to the “monsoonal district of southeastern Asia”. Even as Britain developed intensive tea cultivation in South Asia, they continued to sell Chinese tea in Morocco, likely due to the established preference for green rather than black tea; Indian plantations produced quality black but rarely green teas. Gunpowder, the most popular variety of green tea in Morocco, primarily comes from the Zhejiang Province on the East China Sea coast.

The availability of tea shifted in the nineteenth and early twentieth century with a string of key events namely the Crimean War in the 1850s; the British East India Company diverted tea meant for the Baltic States to Morocco, leading to a further increase in the availability of tea. By the early 20th century, under the French protectorate, mint tea had become well established in Morocco. Moroccans’ taste for tea was made possible by the integration of Morocco into global capitalist networks, a process that included European colonization and Moroccan disenfranchisement, urban migration, and the shift from subsistence agriculture to an economy based on agricultural exports. More Moroccans sought wage labor on large-scale farms or relocated to booming colonial cities like Casablanca and Marrakesh in search of work in factories or in construction. As Moroccans distanced themselves from small-scale agriculture, they became more reliant on cheap, imported foods like refined sugar and green tea as affordable and available dietary staples. French colonial authorities, for their part, encouraged the growth of Moroccan sugar consumption as a way of fuelling labor productivity while also benefitting the major French sugar refineries that dominated the Moroccan market.

The other key imported component of atay was, of course, sugar. Originally, sugar was grown locally, and sugar’s history in Morocco stretches back more than a millennium. Morocco was one of the world’s leading producers of sugar in the medieval and early modern periods. The first known reference to cane cultivation in Morocco comes from the ninth-century writer Abu Hanifa. He mentions large-scale plantations in parts of the Moroccan south such as the Haouz (near Marrakesh), the Haha, and the Sus (on the southern slopes of the High Atlas). Under the Saadi dynasty (1549-1649), sugar cane plantations depended on black African slave labor, captured during military expeditions across the Sahara. Moroccan sugar was well-known in Europe; the Italian marble in the Bahia Palace in Marrakesh was reportedly purchased with Moroccan sugar. By the nineteenth century, the Moroccan sugar industry had become irrelevant, overtaken by the scale and scope of plantation cane cultivation in the Americas. There is some evidence of small scale production in the deep south, but there was no significant export trade in sugar from the eighteenth century to the late twentieth, when COSUMAR began exporting some of their sugar to other parts of Africa.

Beginning in the 1860s, the Moroccan state attempted to again restart production and refining of sugar, but it ran into tremendous technological expertise problems. Instead, during the sugar boom of the second half of the nineteenth century, most sugar consumed in Morocco was grown in Cuba or Brazil, then shipped across the Atlantic to France. There it was refined in the major sugar refining facilities of Paris, Nantes, and especially Marseille at the Raffineries de Saint-Louis and the Raffineries de la Mediterrannée. The qalab es-sukar or pain de sucre was, as its name suggests, a conical-shaped “loaf” of sugar with a rounded top. It was created by pouring liquid sugar into large moulds. It was a traditional form produced in early modern Morocco and throughout the Mediterranean, and it retained its symbolic and practical importance in the nineteenth and twentieth centuries.

French colonial rule deepened Moroccan reliance on sugar as one of the most basic parts of their diet; by making it the cheapest and most widely available form of sustenance despite being of little to no nutritional value. This happened in large part because increased Moroccan sugar consumption financially benefitted French interests, and the Protectorate collaborated with private businesses throughout its forty-two year reign in order to maximise these benefits. French respect for culture—what we might call most basically the Moroccan “sweet tooth”—disguised this fairly plain search for profit.

Along with the imported sugar and green tea, atay had two local ingredients, water and fresh herbs, usually mint. The water, of course, is local. Beyond hydration and refreshment, the process of boiling it in order to steep the tea and mint offered the added benefit of making potentially hazardous water potable. The fresh herbs, too, were also locally grown. The Arabic term for mint, naʻnāʻ, typically refers to spearmint, the most common herb used in atay. But other varieties of mint are widely used, such as flio (peppermint), as well as a whole range of other herbs. Most Moroccans grow their own mint (and other herbs) rather than purchase it in markets, from small grocers, or from peddlers who spread out their wares on the side of the street. Yet, its commercial insignificance is in sharp contrast to its gustatory and olfactory importance in a glass of atay. Mint is the predominant flavour of the drink. Sugar serves to bring out mint’s natural sweetness, while mint helps to round off the slight bitterness of plain green tea. Part of the genius of infusing mint into the drink was to hide the flavour of the relatively low quality, Chinese green tea most commonly consumed in Morocco since the late nineteenth century. Mint’s smell is pungent and distinct; one can instantly tell that tea is being prepared nearby because of the powerful scent that carries from the infusion of mint.

As “Moroccan mint tea” has become an exportable, global commodity, mint has become the defining characteristic of these new products, to the point where some of them contain no tea at all. In some parts of Morocco, drinkers filled their pots with so much fresh mint that the green tea component was barely discernible. For example, the Jewish population of Rabat in the early colonial period was known to refer to its preferred drink not as a cup of tea but “a glass of mint”. Cheers to that! Or, as Moroccans would say, bismillah!