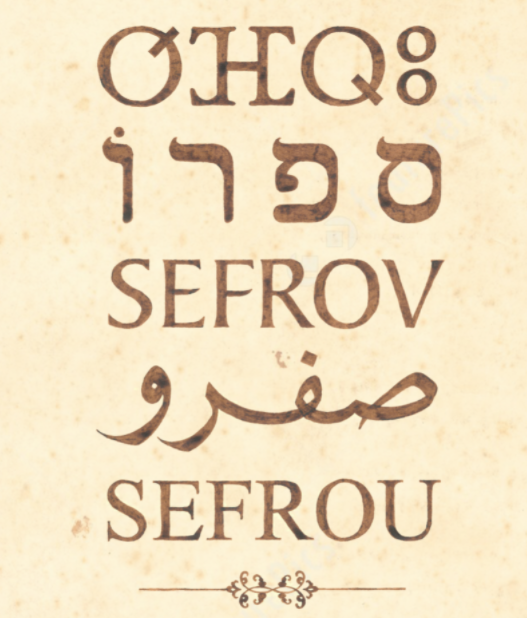 In their opus entitled “Meaning and Order in Moroccan Societies: Three Essays in Cultural Analysis” Clifford Geertz, Hildred Geertz and Laurence Rozen discuss life in Sefrou, where Jews, Amazighs, and Arabs lived side by side in total harmony for centuries.

These American anthropologists who took a close interest in the social structure of the city of Sefrou and its economy of bazaar came to the conclusion that the Jewish community of this city, although Jewish of confession, was no different from the Muslim community and was certainly not a separate community living in seclusion:

“The Jewish trading community provides, when set beside the Muslim, a model case in the delicacies of sociological comparison: From many points of view, it looks exactly like the Muslim community; from as many others, totally different. The Jews were at once Sefrouis like any others and resoundingly themselves. Many of their institutions -in the bazaar setting, most of them- were direct counterparts to Muslim ones; often even the terminology was not changed. But the way those institutions were put together to from a pattern, the organizational whole they add to, was in such sharp contrast to the Muslim way as to be almost an answer to it. It is not possible to treat the Jews as just one more “tribe” in the Moroccan conglomerate, another nisba, though they were certainly that too. Moroccan to the core and Jewish to the same core, they were heritors of a tradition double and indivisible and in no way marginal.”

At the same time, these researchers came to the conclusion that the Jews, who were certainly one hundred percent Moroccan, played a pivotal role in stabilizing Moroccan society in the region. On the one hand, they were instrumental in the growth and development of local commerce, rural trade and caravan trade and, also, and most importantly, calmed the adversities of the Amazighs of the Middle Atlas and the Arabs of the plain of Sais and prevented potential urban feuding. So, in many ways Jews acted as undeclared peace-makers and social mediators.

Today, there are, maybe, one or two Jewish families left in Sefrou, the others have all migrated to Fez or Casablanca or immigrated to France, Canada and Israel. But, despite their physical departure, they remain emotionally very attached to this mythical city which has seen, for centuries, a harmonious and exemplary cohabitation between two religions, three ethnic groups and cultures and several standards of living. Many Jewish families come back to Sefrou every year to undertake a sentimental pilgrimage in the delightful mazes of this millennial town and see again, the mellah, known as “Little Jerusalem,” and visit the synagogues and the Talmudic school.

In the thirties of the last century, the majority of Jews lived in the Mellah with the exception of a minority of them who served in the colonial administration as interpreters or civil servants. These, because of their importance in the social hierarchy, lived in the New Town (Ville nouvelle), the European district.

After independence, the Mellah was no longer the exclusive place of residence of Jews since Muslim families settled there without any priori. This change of social norms created in this city a culture of solidarity and sharing between Jewish and Muslim communities. This culture was based on the concept of respect of others in their religious and ethnic differences. In doing so both communities lived in complete symbiosis. The Muslims celebrated with the Jews their religious feast, while the Jews strictly respected the code of abstinence of the Muslims during the holy month of Ramadan, something which the latter greatly appreciated. But the highlight of the religious coexistence initiated in Sefrou was the veneration of the same saints by the two religious communities. For Geertz and his team, Jews and Muslims, despite their differences, had much in common on the cultural level.

Sefrou was not only a city where Muslims and Jews lived in harmony, it was also a town that invented, long ago, the concept of religious coexistence in its true sense.